Tida has big dreams. The 20-year-old wants to become a U.S. Senator; the ﬁrst female president of The Gambia, her country of origin; a doctor; honor the sacriﬁces her parents made for her; and empower and uplift her local communities — and she’s already got a head start on those dreams. This fall, Tida began her freshman year as a Government major at Smith College in Massachusetts, becoming the ﬁrst person in her family to attend university in the United States.

Tida’s inspiring journey began about ﬁve years ago when she immigrated to the United States from The Gambia with her father and brother, settling in New York City.

A few months after arriving in the U.S.,Tida joined Harlem-based The Brotherhood Sister Sol (BroSis) and signed up for their programming after ﬁnding a ﬂyer outside her classroom.

“I had nothing to do here. I only know my family (on) my dad's side,” Tida said. “I had no friends in the beginning, and I decided to join BroSis to explore my areas of interest and be a part of something greater.”

Money raised through Red Nose Day supports several multi-layered programs at BroSis focused on leadership development and educational support for Black and Latinx youth in historically marginalized communities, especially girls and young women. BroSis’ holistic programs include after school care, counseling, summer camp, job training, college and employment preparation, activist training, community gardening, mental health support, and arts education. BroSis is a place where youth have a voice, develop new ways of thinking about the world, and are supported to step into their power as agents of change.

At BroSis, the high school senior has found a support system — a sisterhood — that is different from what she has at home, being the only woman in her immediate family living in New York City while her mother is still in The Gambia, working as a nurse and taking care of her grandmother.

“It's hard to be here with my dad and my brother with my mother back home in Gambia,” Tida added. “Every time I come here [to BroSis], it's a whole different feeling.”

Tida beams with hope and conﬁdence. She feels empowered by a community that encourages her to express herself through authentic and creative means. And, perhaps most importantly, Tida’s relationships and experiences at BroSis have helped shape and amplify her voice as a young leader for social justice. 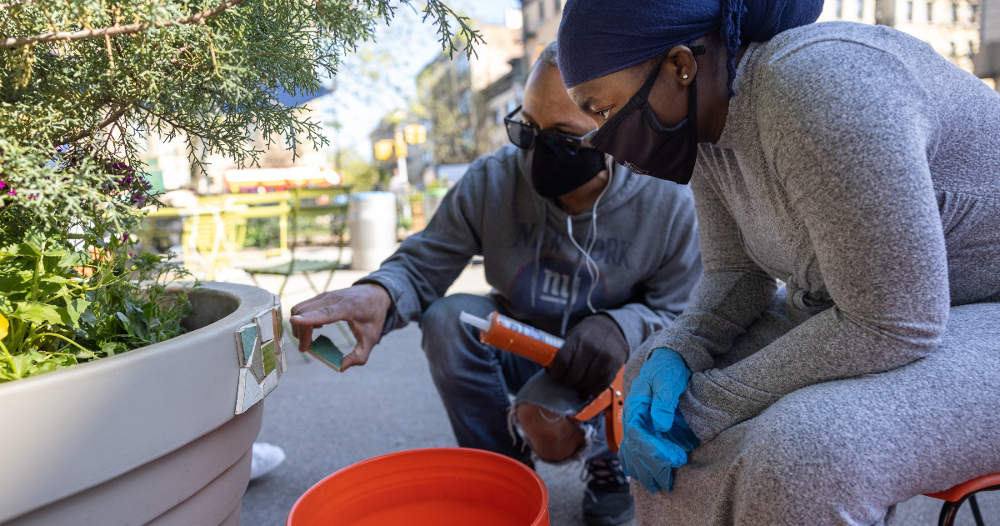 Today, Tida is one of several young women that are members of the Liberation Program at BroSis, which holds space for youth leaders to learn and develop skills that help them identify problems within their communities, analyze solutions, and take action to create change. In the process, members also learn about past and current leaders in the movement for social justice, equity and inclusion on the local, national, and international stage. Program facilitators nurture, coach and educate girls and young women as they prepare them for a politically-engaged future and self-sufficient adulthood.

“BroSis has deﬁnitely helped me to become a facilitator in different areas. It has allowed me to grow and be out there for other people,” Tida added, noting that BroSis empowered her to positively inﬂuence other people, and as a result, six of her friends joined the program.

More than anything, Tida wants to be the kind of leader that builds a better and more beautiful world — a world ﬁlled with compassion, understanding, and love for all communities and all people.

“I want to be a legend at the end of the day,” she added. “I’d like to be someone people know. I like to help people.”

Tida has already taken steps toward making her big dreams come true, and now, with the love and support of The Brotherhood Sister Sol, she’s well on her way. Learn more about Red Nose Day’s focus on Empowering Youth.