We're one week away from the seventh annual Red Nose Day, and we’re a little nostalgic about all the Red Nose Days past. 6 years. Over $240 million raised to help children in need. Millions of Americans going #NosesOn.

That’s why we’ve put together a list of some of our favorite moments from the first six years of Red Nose Day. To get ready to make some new memories tomorrow, we’re looking back at the fun we’ve had and the impact we’ve made.

Millions of Americans around the country get their #NosesOn

Red Nose Nation. We see you. We love you. Thank you for supporting us year after year.

Here’s a quick look at the millions around the country who have gone #NosesOn to help end child poverty.

Hundreds of our famous friends come together for Red Nose Day

Every year for Red Nose Day, some of our famous friends come together to donate their time and money to help end child poverty – one song, one sketch, one joke, and one nose at a time. From Jack Black to Julia Roberts, Zac Efron to Anne Hathaway, hundreds of celebrities have joined us to help raise funds and awareness for the cause.

Take a look at some of our favorite celebrity moments:

The cast of your favorite Rom Coms reunite!

Some very cool things happen when your co-founder is also a celebrated screenwriter and director of so many beloved Romantic Comedies.

Red Nose Day Actually and One Red Nose Day and a Wedding were the #NosesOn mini-sequels we never knew we needed. Thanks to Red Nose Day co-founder (and writer/director of Love Actually and Four Weddings and a Funeral) Richard Curtis, along with the cast, crew, and everyone that watched and donated.

Watch One Red Nose Day and a Wedding:

Chris Martin wanted to do something big for Red Nose Day. What’s bigger than putting together a musical with the cast of Game of Thrones – which, back in 2015, was one of the biggest shows in the world? IMO, not a single thing! Hilarity, and some great music, ensues.

Check out Coldplay’s Game of Thrones: The Musical from Red Nose Day 2015:

Live streaming for a cause

In the last few years, live streaming on Twitch, YouTube, Instagram, and Facebook has grown like crazy! And we’ve been lucky enough to be a part of it. Popular streamers, celebrities, and thousands of non-famous Americans have come together to raise money and have fun while streaming it all.

Check out some of our favorite moments...

This very special game brought together long-time D&D fan and player Stephen Colbert and all-star Dungeon Master, Critical Role’s Matthew Mercer. Fans were able to donate to impact the game (like by voting for Stephen’s character class and companion), which made for some very interesting choices.

#HopeFromHome raises over $1.7M to help fight the impacts of COVID-19

On World Health Day 2020, entertainers, influencers, gamers, streamers, and the public came together across a range of platforms to share inspiring stories, entertain their audiences, and raise some much-needed funds. This includes YouTuber Jacksepticeye raising a record $650K+ in just 12 hours!

Earlier this year, we took a look behind the scenes of The Upside Down with the cast of Stranger Things... and some other very special guests as well. 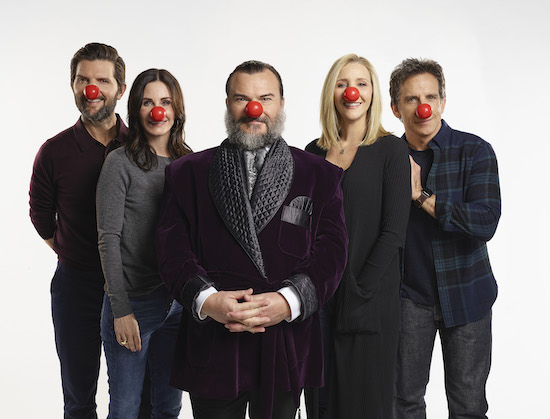 We are SO excited to continue the fun this year, and make a bigger impact than ever. Don’t forget to tune-in to the exclusive Red Nose Day x Coldplay performance LIVE on TikTok airing Monday, May 24 12pm PT/3 pm ET. And of course, tune-in Thursday May 27 for Red Nose Day LIVE followed by an exclusive episode of The Wall 8/7C only on NBC.